Bill Dost, MD of D&D Leasing UK, believes that the best is still ahead IF we adopt the right attitude

As one looks over the last 12 months and then contemplates the next 12 to come, a few things become obvious.  There seems to be, and has been, a spirit of fear in the market place.  This spirit of fear leads people to insulate themselves, and not to take chances.  For leasing companies this means a number of their clients, as evidenced by the last few years, have stalled on making new acquisitions unless they have had cash on hand to purchase them.  This obviously slows the economy down as investment is not occurring in individual businesses, which means investment is not occurring in the economy at large.  That was the scene entering 2011, with a lot of  youthful enthusiasm hoping that this state wold change for the coming year.

Indeed, 2011 showed some very strong signs of recovery and for a while we all believed that the dark clouds were passing, until a number of events occurred; chief among them the USA’s struggle to raise its debt ceiling, and of course the sovereign debt crisis led by Greece and many other Mediterranean countries.  So those of us who had been hopeful, suddenly had our hopes dashed across the rocks . . or did we?

I think it’s important to actually look at the gains over the last few years before we start assuming the sky is falling down.  Arrears have dropped, money is still being spent, the government is attempting, or claiming to attempt to assist the market, housing (depending on the month) is on the rise, new businesses are starting up and more importantly we’re all smarter at what we’re doing.  Sure we can look at the negative and state unemployment is up, and new business isn’t where it used to be, but that is making an assumption that life will go back to pre-2008 levels immediately or in the short term.  That simply just isn’t the case.  We may not ever get there, but when we get closer we will be able to create growth that will sustain itself.

2012, I suspect, will be a great year for some, and a terrible year for others.  The idea of business as usual is not just ill thought out, but is foolish.  2012 cannot be business as usual, it needs to be innovative, I’m not saying we should start purchasing outside of our credit box or offering forgiveness on contracts, rather what I am saying is we as financiers need to find different ways to grow and morph our businesses.  For some it will mean aggressive growth, for others it will mean private label programs, others still will look to become specialist niche financiers and for some it will mean merging with another company.  The reality is that there is a lot of business out there to be won, and it will be based on YOUR staff and YOUR commitment to YOUR potential customer base that will either make 2012 a resounding success, or a dismal failure.

So, what about my outlook for 2012?  It really depends on your attitude and what you’re going to do with your resources, I suggest that all senior management take a day or two off site, decide what your goals are for 2012, and can you achieve them doing what you’re doing?  If not, what needs to change so you can get there?  Without some honest, basic self-assessment you won’t be able to achieve your 2012 growth goals.  The days of choosing a number as a budgeted line item are over, you have to understand – and then ensure you have buy-in from your team – where that number, however great or small, comes from.  I personally believe we’re in for a great 2012 and that the best is in front of us, as long as we’re prepared to meet the challenges headed our way. 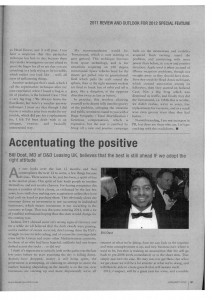 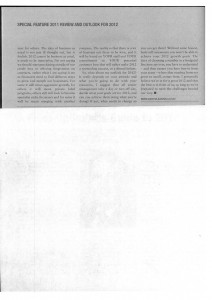