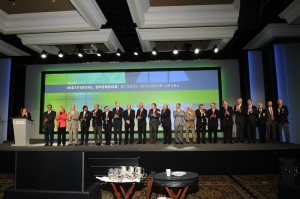 Rev. Dr. K. Bill Dost is fourth donor from the left. At the podium is Kelli Nienaber, of the Equipment Leasing & Finance Foundation, Washington, D.C.

In October we had our thoughts about the economic recovery confirmed. We learned from a remarkable speaker at the ELFA convention, Robert Wescott, PH.D, president of Keybridge Research, that there is a gradual increase in the propensity to finance and there are better quality portfolios this year—positive news for the industry. On the other hand, he said the U.S. has been stuck in subpar GDP growth for 8 years. Nevertheless, he said 2015 is shaping up as a year to expect a 3 percent growth rate. The headwinds are slowing world economies and geopolitical risk, he reported. Overall, Wescott was optimistic, reporting that 3 million workers were added in the past year and credit is flowing again in America. The slowdown in China and the “Putin effect” in Europe were cited as being on the economist’s watch list.

Keybridge is a Washington, D.C. research firm providing valued economic reporting to the Foundation of Equipment Leasing and Finance in the U.S. He was also a speaker Foundation lunch at last year’s convention.

D&D Leasing is a proud contributor to this foundation, a future-oriented information powerhouse. I was pleased to take the stage with other key donors representing.