When You Must Treat Customers Differently

Senior credit professionals have explained how customers with regulated credit must be treated differently from those with non-regulated credit, to comply with new FCA rules By Stephen Kiely

CREDIT professionals, working under regulators other than the Financial Conduct Authority (FCA), have been warned that they must treat customers according to the requirements of each regulator, rather than relying on the FCA as a ‘baseline’ of compliance.

Speaking at CCR’s round-table debate, run in association with Ardent Credit Services, Graham Hunt, head of collections UK & Ireland at Aviva General Insurance, said: “As a company, we have large amounts of both regulated and non-regulated credit and that is a real challenge, understanding the necessary different approaches and not to be able to take consistent approaches.

“We have to be aware, when dealing with the FCA, that if I were to treat a non-regulated customer as a regulated one, then that would still be classed as a breach of principles, when, actually, you might be giving them more information than they need. You cannot apply a consistent approach across your whole customer base.”

He said that, if the regulator found that a company was sending regulated documentation to 100% of its customers, when 10% were non-regulated, then that could be classed as a breach. It could be considered to be sending irrelevant – and, therefore, potentially confusing – documentation to customers.

Sue Chapple, senior manager – revenue management at EDF Energy, said: “One would imagine that the lowest-common-denominator was the regulated approach, so if you treated everyone according to that, then that should be a good thing.”

Mr Hunt added: “You would be seen as imposing something on a customer. Say, for example, if you were sending out a notice to someone in arrears, and that is a document that, under the FCA, the customer does not need, then that would be treated as an irrelevant document being sent to the customer and potentially confusing them.”

“We have several procedures and policies because the amount of work involved in collecting regulated debt is considerable, so we would, effectively, need to set up an entirely new department if you wanted to follow the exact same rules for unregulated business, such as the prescribed way of sending default notices.

“Nevertheless, there is no question as to the fact that the FCA principles must be complied with for both regulated and unregulated business.

Sandra Parry, programme director of collections and recoveries at Ulster Bank, added: “If you have a customer with three products with you, two that are regulated and one not, you have to send out different notices for the two than for the third because the customer is supposed to understand two of them but not the third, which seems strange and possibly more confusing to a customer.”

Meanwhile, Athol Abrahams, head of risk and compliance at D&D Leasing, said: “The FCA is a principles-based regulator so, while we can get totally caught up in the underlying rules, let us just step back and remember that the majority of people who are fined, are fined on breaches of the principles, rather than the rules.

“So, while you are going through rulebooks and creating processes and evidence, in a lot of cases, what we are actually talking about is best practice.” 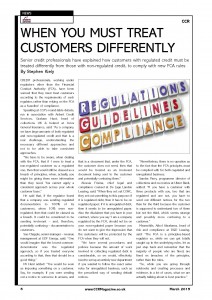