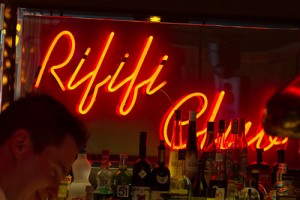 If you see bleary eyes around the office it is doubtless from attending too many Christmas parties, this year surely beats all records for the amount of  quaffing and carousing that’s been going on. Can you have too many Christmas parties?  It’s hard to say, and churlish to carp.  Once upon a time there was only one Christmas party to do with work, and you either loved it or dreaded it.  Nowadays, three or four Christmas parties is the minimum, but how come it’s not a problem to get the time off work?  Well, the story goes that officially it’s networking, so it counts  as business.  Do those that have to stay behind at the office feel left out? Probably not, as they’re either working so flat out that they don’t even notice, or they welcome the peace and quiet.

For us the Christmas party season began with the Finance & Leasing Association’s Christmas Drinks reception held at the Butchers Hall by St Paul’s in London. Over a hundred of UK leasing’s great and good gathered  for an event that has been a favourite in the ancient Gregorian leasing calendar across centuries, literally. It’s a very correct and proper affair, only starting at 6.3opm, after the working day has drawn to a close.  The Director General makes a short speech, the stats are showing that business  levels are creeping up, so everyone’s in a good mood, especially as generous supplies of sausages, mince pies and mini Christmas puddings make the rounds. Your reporter begins to feel a bit restless, so starts taking  photos of people’s ties, for an impromptu “best tie of the evening” award, the winner came from Shire Leasing. The event winds down at 9pm and everyone’s home by eleven. There is an entrance fee, around a hundred, plus VAT.

Two days later, Thursday the 4th of December, is a marathon eat-and­-drinkathon.  The free drinks start at 11am at the Hispania, a new tapas  restaurant and bar by the Bank of England, hosted by  Hitachi Capital Business Finance, and the leasing boys are roped off away from the City boys, Derivatives and Fixed Income traders, who start their drinking there every day at 11am anyway.  By 2pm the asset finance folk manage to make it to the once infamous, now just famous, almost Shakespearean Blockers Lunch in the upstairs garrets at Simpsons.  This year extra space was acquired, and some eighty people sat down to attack the menu of asteroid-sized sausages and mash, steaks and pies, spotted dick, and jam roly-poly.  The standard pints of ale of yesteryear are now less in evidence, replaced with bottles of heavy reds, rounded off with ports and brandies.  By the end of the Blockers Lunch it’s almost time for dinner, and it is said that some Blockers who waver off into the City streets can disappear for nights on end.

This year, the Blockers have a problem, normally Shaun Carroll, the lunch organiser, books next year’s Blockers Lunch practically before the ink has dried on this year’s bill (around £50 per head, payable by the guests). But next year, the Hispania, says it can’t provide the roped off drinks area, so have suggested the Blockers taking the whole of the upstairs restaurant for  the day, for drinks plus the lunch (guesstimated at a bit more per head), but what about Simpsons (unless the Blockers move on to Simpsons for dinner!).  Die-hards are saying let’s stick with Simpsons, whose only drawback is it’s inadequate pre-lunch drinks area (perhaps they could start with drinks in the Counting House next door?).  The modernists are saying let’s go with Hispania and swap Simpsons’ school dinners for tapas and more international fare. Not a straightforward decision, and we don’t envy the task facing Shaun over this one.

But BrokerWorld was also due at an evening Christmas party at Ping in Earls Court, at the invitation of Aldermore’s PR and communications company. Well, it was a breath of fresh air, the average age was a good twenty years less that the normal leasing do, the gender split was roughly 50-50, chin-wagging was replaced with ping-pong and bar football, all of which your editor is very competent at, thanks to a misspent youth.  It was a lot of fun, and left one hoping that perhaps we’ll get a bit more trendy in asset finance one day.

Less than a week later, on December 10th, came the great Asset Finance – Professionals Association Christmas drinks at the Marylebone Sports Bar and Grill, which attracted around 240 attendees.

Starting at 12.30 with an entry fee of £30 per head (halved for AF-PA members) it’s in a big space, there’s a charity raffle going on, and you can catch up with a lot of people over a couple of hours.  Stephen Bassett told us that his time as AF-PA chairman would be up soon, and said it had been a very special experience, and  to “watch this space.”  There is some overlap of faces between this event and the Blockers Lunch and the FLA do, but sheer numbers mean there are plenty of other people to catch up with. 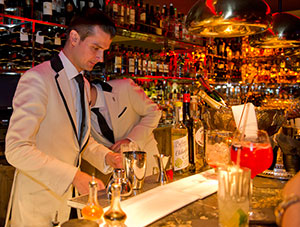 Thursday the 11th of December saw an evening charity event, hosted by D&D Leasing and held at the Rififi Club in Mayfair (by invitation). Bill Dost, D&D’s CEO always makes sure that the bar is in the competent hands of the Savoy’s star bartender, with another Savoy star playing all night at the keyboards. It’s quite a different atmosphere from any of the previous events we’ve talked about, glamorous evening wear is predominant, and there is a strong charity theme.  This year the charity was First Touch, set up in 1998 to support the babies, families and staff on the Neonatal Unit at St George’s Hospital, in Tooting, and  Dr Laura de Rooy gave an impassioned appeal for the work the hospital is doing. 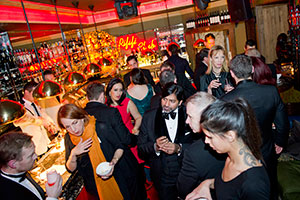 D&D Leasing had funded the Medicine Unboxed Creative Prize worth £10,000, and this year’s winner was (Professor) Tiffany Atkinson, with a unique collection of poetry to be published by Bloodaxe, which “explores through fragmented lyric and multiple voices the ways in which we experience ourselves medically, the alien (for  most people) rhythms, behaviours and language of the hospital environment, and beneath all this, the interrupting, disturbing and often embarrassing experience of being in a body.”  Bill had invited Tiffany to give a reading of some of those poems to his guests, which was a very different experience for a Christmas leasing do.

Did the partying end there? No, it didn’t, apparently some carried on till 4am, which explained even more bleary eyes at the Leasing Charity Lunch the next day, held at the Institute of Directors in Pall Mall.  This event, established in the 198os by leasing legend Vic Lock, now passed away, has  been taken over by the Leasing Foundation, taking it to an altogether different level of performance.

There is a charity raffle, and a charity auction, with some items going for thousands of pounds.  The after-lunch speaker was an ex-Arsenal professional footballer, and now Sky TV pundit, Paul Merson, who gave the audience the roller-coaster of his life story, peppered with colourful language (for which he apologised in advance) and great jokes, plus key insights into his choice of the greatest characters in football (his heroes include Arsene Wenger, Bryan Robson, and Gazza). The Leasing Charity Lunch raised £24,000 for fighting cancer, a very impressive sum indeed.

As we bring our Christmas festivities report to a close, we sense there are still more Christmas parties going on out there as we write, but for our part we are partied out and retiring to the rain ­washed hills and dales of Worcestershire to prepare for the business of the “real Christmas” party.  It just remains for us co wish our readers the very best of Christmases, with all the joys that this time of year can bring, and trust we shall all enjoy a healthy and wealthy New Year in 2015. BW