A lessor with an upbeat message

D&D Leasing was formed in Burlington, Canada some 13 years ago by Rev. Dr. K Bill Dost and his brother Dr. Rehan Dost. The idea, Bill Dost explained, was to form a “lean and mean” finance company aiming at third tier customers in the equipment leasing sector.

Dost had already worked in the leasing industry in addition to achieving a Doctor of Theology qualification from Sanctus Theological – and a Master in Business Administration from Edinburgh’s Heriot­-Watt University.

In Canada, where Dost is company president, D&D Leasing has specialized in financing a range of general equipment such as printing presses, yellow irons, office equipment and the like. Average balances are in the region of Can $15,000 and typical customers are small businesses and entrepreneurs which are seeking to meet their growth plans with existing credit lines.

In 2009 Dost, seeking expansion, commenced operations in the UK. “The UK has twice the population and three times the leasing market that Canada has,” he said, “and unlike the US, which has 50 states  and 50 sets of laws, it has one concentrated area to do business within.”

“Add to that a mature broker market, the familiar legal set-up, and the opportunities for moving into the European Union, and you can see why the UK was a natural choice for us.”

Commencing new-business operations at the start of the severest recession for a generation was never going to be easy, even with a stalwart and supportive set of shareholders. Dost told Asset Finance International that the first months were spent “building our footprint”. “In Canada the company is mainly broker based, but in the UK we are totally broker based,” he explained.

Brian Jerome, Head of Business at D&D Leasing said that from the start brokers were eager to establish a relationship with the company. “It was a time when brokers were finding it difficult to place business – especially the more unusual forms of asset that we specialized in.”

Jerome, who brought some 26 years’ experience of the UK leasing sector to the company, latterly with Barclays Asset Finance, explained that D&D’s approach is to assess the merits of each deal in full, not just the agency report information. “We ask what the business does, what the asset acquisition will achieve as a revenue generator and as a cost saver – and how fundamental the asset is to the business. Then we assess whether it will have the ability to make the repayments.”

Dost stressed that each supporting broker is carefully selected and will invariably have established funders for their Tier 1 credit. Assets to be financed will include almost anything except wheeled assets.

Within D&D’s credit underwriting requirements are the necessity for potential customers to have “a solid business plan and thought process, sound experience of their industry and an awareness that the directors know what they are doing”. He added: “Much due diligence goes into our credit appraisal and in the process we need to see the cash-flow serviceability of the lease.”

A further refinement for D&D’s customer care is close, and ongoing, involvement with the client during the course of the finance agreement.

Currently D&D’s transaction size ranges from £1,000 to £35,000, with the average ticket size being £15,000. The company does not take a position on residual values – preferring to rely on credit enhancements and/or balloon payments.

D&D, which is a patron and keen supporter of the National Association of Commercial Finance Brokers (NACFB) is seeking to expand its panel of brokers later this year. It has total coverage of England and Wales at the present time.

Shortly after formation in the UK, Dost opted for NetSol’s packaged lease and loan administration system, Evolve, as a proven, solid computer system that could support his business and provide a platform for growth.

“Evolve had the necessary functionality to handle all our requirements, and most importantly NetSol offered a rapid implementation alongside acceptable commercial terms. Evolve was implemented within six weeks. Since our go-live we have taken a new release that provides an updated Equifax export interface, along with more flexibility to manage our documents,” he added.

As the D&D business grows the decision to go with Evolve will provide the opportunity of an easy upgrade from Evolve to LeaseSoft Asset. Evolve provides packaged functionality, with all Evolve clients operating the same package version, whereas upgrading to LeaseSoft Asset opens the possibility for custom software enhancement to differentiate  and create real advantage.

The company currently employs six staff at its central London head office. With the intention of using the UK as a launching platform for mainland Europe, Dost confirmed that market suitability is being assessed for Poland and Germany – although no immediate timeline has been established.

The company also believes in “creating things that will grow” and has a defined ethos in gaining a reward in helping others succeed.

D&D executives’ enthusiasm for their work carries forward to active membership and participation in the Finance & Leasing Association and the Consumer Credit Trade Association. 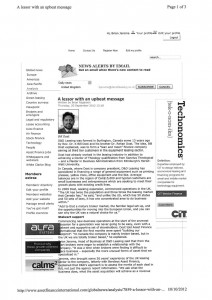