The trend in leasing since 2009 has been for each year to be a bit better than the year before, so the LeasingWorld view in January was that 2012 would be better than 2011, and as it turns out, it was.  Bill Dost, D&D Leasing’s CEO wasn’t too worried either, saying that those of us still here have got a lot smarter about protecting our businesses through adverse times.

Nevertheless, these are times when it is wise to expect the unexpected, and the unexpected didn’t disappoint, as we were to find in January when a schools “leasing scam” hit the BBC headlines, first on the radio, then later in the year on TV.

One unexpected development which had a very positive reception was our launch of BrokerWorld magazine, which is sent to over 450 UK asset finance brokers each month, and has been well received. 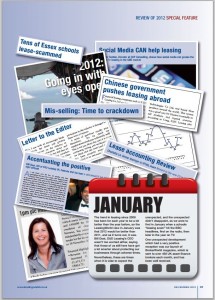