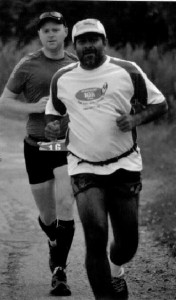 Bill Dost, President of D&D Leasing, shared with us that each year for the past four years he has run in ENDURrun, in Ontario, Canada, a 100-mile race, over 8 days, 7 courses, staged foot race over that is in August of every year. He told us, “I’ve run it for 4 years.  It encompasses trails, streets,  point to point, loops, there and back courses, and mountainous terrain as well as time trials.  The  event starts with a half marathon on day 1, and ends with a full marathon on the final day.  Alas, this year I was injured in stage 3 and was unable to complete, but I usually  finish in approximately 16 and a half hours over all.”

It’s known as the Tour de France of running events, and like the Tour, gets worldwide attention. The website says, “Rarely does an event challenge you beyond your running goals and dreams. With seven races in eight days, The ENDURrun has been doing exactly this for eleven years. The variety, precision and difficulty of the seven stages takes you outside your running comfort zone.

But it’s not just about the racing; the week long ENDURrun experience has helped create a community of runners like no other event. The ENDURrunners community has supported the event from the low watermark of five runners in 2006, and has grown in size and strength ever since.

At the end of the event you can get the title “I am one tough runner”, a title that is earned over 8 days, 7 stages and 160 kilometres. Judging from the photos, our Reverend Bill Dost is one tough runner too. 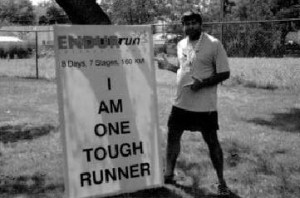 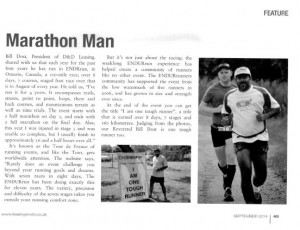