Funders should find interesting niches and go after them

Canada-headquartered D&D Leasing entered the UK market in 2009, offering equipment finance predominantly to small and medium-sized enterprises. The company, which secured a funding facility with Conister Bank in 2012, has been providing equipment finance of up to £50,000 (€68,600). 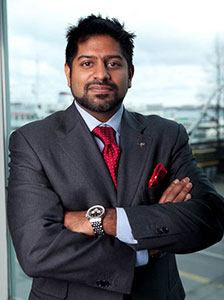 Three years ago, the company launched a pilot programme to provide professions loans, having identified a gap in the market.

Dost says: “We found that a number of our customers were seeking working capital or needed to fulfill small capital needs, such as tax purposes and insurance requirements. The loans demanded did not fit our asset finance propositions, but we were able to fill the gap through the creation of this product.”

Dost believes there’s a business case for funders to provide such loans rather than banks.”Banks actively say that it doesn’t make sense for them to lend to clients under £100,000 because they can’t make a profit on such loans, whereas funders like us can,” Dost says.

Despite the success of this loan product, Dost highlights that the company remains an equipment leasing company. On the other hand, he believes that in future finance companies’ strategies will change, not limiting their offering to a certain number of loans and leases.

“As the financial market changes, you will see a time where it will not be about funding an asset or providing a professions loan, but about finding the product the customers need and providing it for them,” Dost explains.

Dost says that competition in the UK equipment leasing market is intense and that companies should look for new products they can fund.

Dost explains: “I think we funders should find interesting niches to go after them and grow. Recently there has been a 3D leasing venture for 3D printers and P2P lender Ablrate started financing aircraft. We have to start looking at things in a different light and stop saying ‘no that is not a product I can fund’ and start saying ‘how can I finance this product’.”

Apart from identifying new products, Dost believes lessors should be flexible with their  product offerings.

“When a product does not perform as well, lessors should take it off the market and find a way to re-present it, redesign it and see if it is valuable to them,” he adds.

On the equipment finance side of the business, D&D Leasing is planning to relaunch its light commercial vehicle proposition over the next year.

“In Canada we’ve done exceedingly well and we are hoping to perform well in the UK as well. We found that we had to reposition that product and we are hoping to relaunch it in the next year,” says Dost. “What we will probably look to do in this market is to speak to the top brokers, vendors and end­-customers in order to identify where the gap is in this marketplace.”

D&D Leasing hopes that with the current and future products it will be able grow further, despite the increased number of market players compared to the time it entered the market.

“The equipment finance market is robust; every day you hear of someone new entering the marketplace,” Dost says. “There’s consolidation, so members are joining or being swallowed up.”

As competition grew, pricing has decreased “significantly” and this has affected  D&D leasing’s rates.

Dost says: “Apart from some very large players that want a significant share of the marketplace, mid-size players that have been bought and new players also want a slice. The only way to get it is by having an enticing rate, forcing everybody to drop rates. Everybody has to make small adjustments, meaning that when we borrow money, we can’t offer higher rates to our funders. It is just a knock-on effect.”

“Money is much more readily available and everybody has to work harder for their slice. Our pricing dropped significantly to match the change in the market; it was the advent of pricing going crazy over the last 18 months or two years. That is the reality of a functioning economy,” he adds.

However he anticipates that pricing will self-adjust in the next few years, as interest rates go up.

Talking about the company’s future plans, Dost tells Leasing Life that D&D Leasing will launch a new product in a pilot phase in the last quarter of this year or the first quarter of 2016. In addition, D&D plans to expand its team further; it has recently added two new people to its  team.

“We’re in the midst of hiring; there are plans to grow the team,” says Dost. “We’re always looking at new products. We should have a new product launched within the next six to nine months.” 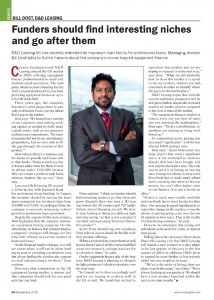