In front of a packed house of industry professionals DND Leasing held its annual black tie charity fundraiser, this time in support of Grief Encounter, a not-for-profit organisation supporting children through bereavement.

DND Leasing Group CEO Rev. Dr. K. Bill Dost took the opportunity in front of a capacity crowd to lend his support to this charity and to make a significant announcement of his own.  D&D Leasing originally formed in 2000, in Canada to support SMEs through the acquisition of assets had felt the business had come to a crossroads. D&D Leasing was in essence no longer just a leasing company, offering loans, professional loans, equipment leases, vehicle finance and now a credit card.

Dost explained, “We realised the name no longer fit.  We were so much more than just a leasing company, we had evolved into a Finance House.”  He announced that D&D Leasing was no more and in its place was a company with a clear direction in how they supported their client base.  This company is now called DND Finance.

Dost continued, “We felt the timing and the name really fit, we’ve had an exciting year and we feel the future has lots of potential.”  The new name was therefore chosen not just to acknowledge what DND has financed before but also to allow for growth into future areas of finance.

CEO Rev. Dr. K. Bill Dost has recently announced a historic new partnership with humanitarian organisation WE. WE was founded in 1995 by twelve-year-old Craig Kielburger.  What started as a youth-led, anti-child-labour organisation developed into a global movement with domestic and international aims.  WE works with teachers and students across the UK North America to give them tools and inspiration to make a difference to the local and global issues they care about. In developing communities in Asia, Africa and Latin America, WE works to break the cycle of poverty through its sustainable development programme, WE Villages.  Alongside community leaders and local governments, WE Villages improves access to education, clean water, healthcare, and food, whilst equipping community members with the skills and infrastructure to be self-sufficient, within an average of five years.

DND Finance will be supporting this programming by providing funding by setting aside monthly income from every finance contract it funds or originates, throughout life of the contract.

Dost says, “I’m really excited about this initiative for a few reasons.  Firstly, we’re able to help people at a grass roots level and through WE our funds will go to a place that really and truly needs that help.  Secondly, while the amounts start off small, over time and with the compound effect, our donations will have lasting impact for this community.  One of our corporate values has always been to be Community Builders and I see there being no better way than this.”

DND Finance, the new name for D&D Leasing, can be found at www.dndf.business.  It was founded in 2000 to support SMEs in the sub prime and near prime sector, with a stated mission is to change the lives of a million entrepreneurs, on top of its charitable work. 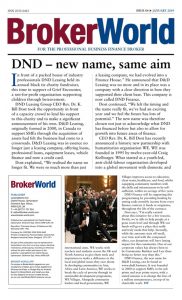