Benjamin Verde (“BV”), formerly an artist management turned artist investment firm, has transformed the Canadian entertainment sector by being the first and only fully private Artist and Entertainment funding solution in Canada. Benjamin Verde’s board of directors have developed a robust platform specifically designed for the financial needs of creatives who are unable to obtain funding from traditional lenders, banks or other institutions.

Specialising in finance across the business loan, vehicle finance, equipment finance and leasing markets, DND Finance is a 19-year-old corporate enterprise with operations in Canada and the UK. The recent launch of the DND Secured Charge Card is also very exciting news. The Charge Card is a hybrid product which caters to the financial needs of both Corporates and Individuals with new, slightly bruised or damaged credit scores and credit history.

Charles Murray, CEO and Founder of Benjamin Verde Incorporated, commented, “DND’s $1 million investment into Benjamin Verde’s Artist Funding Program is huge for emerging artists. This alignment with DND Finance is truly ground-breaking! Just imagine the number of new artists, bands, and brands that will be introduced to the world… maybe the next Michael Jackson, Celine Dion, Drake or possibly the next Spotify.”

The partnership presents an equally unique opportunity for both companies to grow organically. The osmosis-based relationship will allow DND Finance to gain access to an untapped and grossly under-serviced entertainment market segment while simultaneously enabling Benjamin Verde to expand its consultancy and A&E funding operations across the pond.

Group CEO of DND Finance Rev. Dr. K. Bill Dost said, “DND Finance is extremely excited about this team-up with Benjamin Verde. Not only are we able to service an underserved market in Canada, which is what DND specialises in, it takes us into a new frontier which is clearly not seeing support from other institutions. This means that together BV and DND can help the next budding Canadian Artists and Entrepreneurs make an impact in the world.”

Benjamin Verde will continue its subprime inspired business model to its Canadian customers as it prepares to commence UK operations with the support of DND Finance. DND will provide a finance facility from which Benjamin Verde will service its new and existing clientele. The facility will assist over one thousand Independent artists and entertainment entrepreneurs. 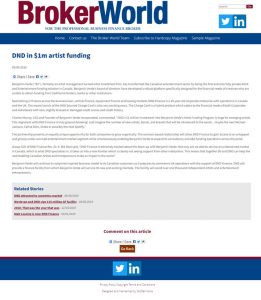