Law firms and other professional bodies are starting to grow once more following the trauma of the recession.

During that period, 2009-2014, a lessening of demand coupled with mergers and amalgamations led to much disruption and uncertainty amongst these companies.

Now, however, most are back on track and seeking to expand their operations including into new areas of expertise. As a result they need the necessary funding to grow – but are finding that their banks remain unwilling to grant new loans to any other than the largest firms.

As a result, and in a quest to fill the vacuum, last year D&D Leasing UK completed a £20 million facility with Raphaels Bank for Professions Loans funding.

Now, D&D Leasing’s managing director Bill Dost (pictured above) has revealed that it’s Professions Loans funding facility has been extended to allow for transactions up to £75,000.

Dost told Asset Finance International: “I’m extremely pleased that we’re now able to fund professions up to this level. It shows not just our commitment to the sector but our belief that small business and professions really are the back bone of the economy.

“Time and again we’ve been asked for larger deal size and today we’re happy to say that we’ve heard you and have responded.”

“This increase,” he added, “which takes us from £50,000 to £75,000 is a full 50% increase in our ticket size for professions. It’s our expectation that this will serve a great number of our clientele and will meet their needs where the bank establishment continually has proven unwilling to.”

“We are especially excited to say that we expect more such announcements in the future as our relationship with Raphaels Bank grows closer.”

Dost stressed that the company is always on the look out to recruit more intermediaries with some expertize in the Professions and Asset Finance sectors. Looking ahead he forecast that D&D Leasing UK is preparing to move into new sectors in the near future but at present the nature of these must remain firmly under wraps. 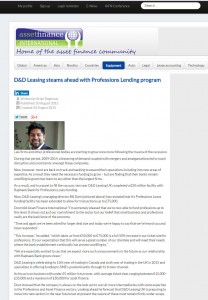