D&D Leasing, the Canadian/UK-based leasing company, is continuing its tradition of raising awareness of lesser known and often underfunded charities by nominating Karma Nirvana, the charity that supports the victims of honour-based abuse and forced marriage, at the D&D Leasing annual Christmas event in London on December 14th.

D&D Leasing CEO Rev. Dr. K. Bill Dost, who is also one of The Leasing Foundation board members, said of his support, “We chose Karma Nirvana as our charity this year because honour based abuse remains a relatively unpublicized concern – but one that affects many people in the UK.”

The founder of Karma Nirvana, Jasvinder Sanghera, is herself a survivor of forced marriage who escaped by running away from home at 16. Jasvinder was awarded a CBE in 2013 and was instrumental in the creation of a specific UK forced marriage criminal offence in 2014.

Karma Nirvana set up the first national helpline to support victims of honour based abuse, helping both those fleeing from immediate danger and those who need long term support. The helpline has received nearly 60,000 calls since 2008, and between 2011 and 2016 there were 7,048 reports to police of assaults, threats to kill and kidnap. Few of these reports result in prosecution.

Dost say, “We think that by supporting Karma Nirvana we can truly have an impact.”

The D&D Christmas Charity event is by invitation only, and while the event is free to attend, the focus is on fundraising for Karma Nirvana. To learn more, email KBD@danddleasing.co.uk, or you can watch a Vimeo interview with Bill Dost here. 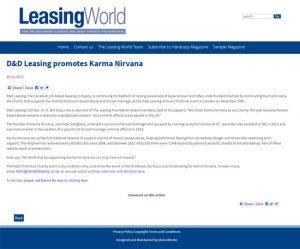