A new funder has entered the UK leasing market with an appetite for higher-risk, broker introduced business. D&D Leasing, run by managing director Bill Dost, began trading in the UK at the start of February after 10 years of operation in Ontario in Canada. It hopes to write between £5 million (€5.7 million) and £10 million in its first year.

Although London has not traditionally been the first step for a Canadian company expanding internationally, Dost – who has been planning the new start-up for the last three years – said:”The UK has twice the population and three times the leasing market that Canada has, and unlike the United States, it has one major metropolitan area from which that market can be reached.”

He added: “Add to that a mature broker market, the familiar legal set-up, and the opportunities for moving into the EU, and you can see why the UK was a natural choice for us.”

According to Dost, business will be approached calmly at first: “We don’t want to drown ourselves in sales, nor do we wish to under service our broker partners.

“As a third-tier funder we have high margins, and are looking to achieve stable, consistent growth.”

Should things progress as planned in the UK, D&D will continue onwards to France or Germany, before looking to enter the CEE sometime in the next five years, said Dost.

In the longer term, the company is making plans to move to India. 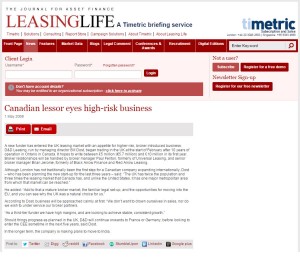