Can a Canadian lessor inject new life into UK market?

UK introducers reading these pages will be heartened by the emergence of Aldermore and Close Business Finance as homes for deals in 2010, but another new name has been heard more and more in conversation over the last quarter.

D&D  Leasing, a Canadian outfit with a bold presence in the subprime market, began trading in the UK in February, and ha s found itself well on the way to the £7.5 million (€8.3 million) it hopes to write before year end 2010 – thanks to good trading with British brokers.

Managing director Bill Dost said that the year so far had been “a wonderful opportunity to pick up the right partners”, with an “astonishing” response from introducers.

From the word go, each of D&D’s broker managers set out to collect 10 relationships over the year.

However, after what broker manager Brian Jerome referred to as a “beauty pageant” of deals, the funder has ended  up with around 30 broker links to its name.

Despite this rapidity of growth, Dost is careful to stick to his original business plan. He is proud of D&D’s upfront attitude to subprime leasing,  which it has imported from Canada: lending at around 26 percent to price conservatively for risk, with greater than average time spent examining deals before closing.

Given the meticulous nature of the funder’s underwriting, there were worries early on that taking on business from larger brokers might inundate D&D systems.

As a result, says Dost, in a move that would have been very unusual in the business environment of three years ago, brokers working with D&D have been given maximum volumes for monthly  business, rather than targets to surpass.

When the business reaches its one year mark in April 2010, D&D looks like it will be in a position to keep on growing. But it is not on the acquisition trail – Dost is clear that he would rather build his book relationship by relationship, rather than purchase “someone else’s bad debt”.

As D&D develops over the next few years, the surviving members of the British third tier funding market may find themselves with stiff new competition. 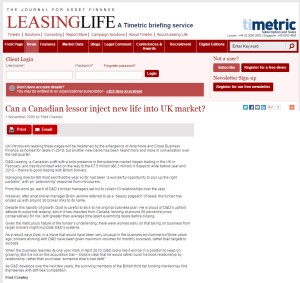