The departure of ING Lease from the UK leasing market will leave the country’s broker introduced sector with a potential £1.7 bn (€2.1 bn) funding gap to fill and has already led several lenders to revise their strategies for the channel.
Netherlands -headquartered ING announced its UK leasing subsidiary was being put into run-off and would cease to write any new business as of 30 November.
ING Lease UK is understood to have written some £1.2 bn of business in 2011, concluding the year with a book size of £2.7 bn. The firm also made £38.4 m profit after tax – up 80% year-on-year – while reducing turnover 1.7% over the same period to £158.9 m, according to data from the UK ‘s Companies House.
Sources with knowledge of the business told Leasing Life ING Lease UK was the group’s most profitable leasing unit and one of the most profitable of all lNG’s commercial banking units in Europe.
A spokesperson for the ING Group confirmed ING Lease UK was profitable but said the results of local leasing business units are not disclosed by the company.
The spokesperson said the decision to wind down the UK leasing business was taken in the context of the wider economic situation and increased regulatory requirements.
The spokesperson said: “The industry in general is faced with significant challenges, and ING is no exception.
“Increased regulatory requirements coupled with additional fiscal charges, the on-going economic malaise and other negative ‘head-winds’ require a serious response.
“Under these circumstances, the strategy of ING Corporate Banking is to focus on our clients and core franchises, further de-risk our activities, optimise our balance sheet and manage our cost base.
“We need to focus our available resources at those strategically important markets and products where we can demonstrate strongest competitive advantage and growth potential.”
ING will continue to offer leasing in its home markets in the Benelux region and in Poland and Turkey where leasing is “a viable and integrated part of the full service banking offering.”
“Despite its good performance, leasing in the UK no longer fits this strategy,” the spokesperson added.

Prior to the UK announcement, six other ING Lease businesses were officially in run-off according to the group: Italy, Spain, France, Germany, Hungary and Russia.
However, other markers are witnessing quiet withdrawals. In Ukraine, for example, where ING was the third biggest lender by portfolio size at the end of 2011, the group’s subsidiary made an unannounced exit from the marker this quarter.
A spokesperson from ING confirmed to Leasing Life that the Ukrainian business is indeed in run-off, despite there having been no announcement made to that effect, and also said ING Lease was exiting the market in Czech Republic, Slovakia and Romania.
Marina Masich, director of Ukraine’s leasing association UUL, told Leasing Life: “ING Bank in Ukraine is successful, and seems to be continually developed.
“Nevertheless, ING has left the leasing market. Our market will regret very much the fact that ING has departed, but I hope it will continue to develop since many of our more longstanding market participants are becoming more active.”

As the largest top-tier broker funder, ING Lease is commonly credited with bolstering the UK broker market after the withdrawal of funders in the wake of the financial crisis, and helped the sector to become the fastest growing segment of UK asset finance over the last year.
While it is not clear exactly what share the company had of the £3.7 bn of brokered asset finance reported by the Finance & Leasing Association (FLA) for the 12 months to 30 August 2012, estimates from competitors range between 30% and 45% meaning a potential funding gap of £1.7 bn.
Through its size and influence on the UK broker market, ING Lease exerted a downward pressure on pricing. The firm’s withdrawal from the market will lessen competition and may allow prices to rise within the broker-led and even the direct leasing markets.
The largest players in the sector are Close Asset Finance, Investec Asset Finance, Siemens Financial Services and Alder­more Bank. Societe Generale Equipment Finance, BNP Paribas Leasing Solutions, Hitachi Capital and GE Capital also work through brokers, with distinct sectoral focuses.
The market also contains a tranche of small but growing funders, many of whom have entered since the recession, including United Trust Bank, Shawbrook, Conister Bank, Arkle, D&D Leasing and alternative funder The Funding Circle.
Accurate figures for each lend­er’s share in the broker market are hard to calculate as new business volumes are kept closely under wraps. None of the major funders contacted by Leasing Life were prepared to offer a solid estimate of competitors’ market share.
So far, Investec and Alder­more have been the most vocal in pledging support to the broker sector post – ING, with the National Association of Commercial Finance Brokers confirming within 36 hours of the ING announcement that both funders would be increasing the amount of funds they are ready to put into the market.

As the dust settles

Royal Bank of Scotland subsidiary Lombard, which withdrew from the broker market in 2009, has confirmed to Leasing Life, while it remains fully committed to the UK leasing industry, it will not be returning to the broker marker.
Ian Isaac, managing director of Lombard Business and Commercial with responsibility for SME lending, said: “It would be a shame if the withdrawal of ING gave out a negative message about the viability and health of leasing businesses. We are keen as others to reaffirm the asset finance arena is an exciting and growing market.”
Isaac said Lombard’s response to the news would be to use it as an opportunity to argue the case for businesses dealing directly with relationship managers at an asset finance house.
A source with knowledge of both companies told Leasing Life it was likely Lombard would consider snapping up some of ING Lease’s portfolios and capabilities in the aftermath of the news. A Lombard spokesperson said it would not comment on speculation.
Julian Rose, head of Asset Finance at the FLA, said: “While it is always difficult to predict what will happen in parts of the marker served by any individual company which is exiting, we would expect other providers to consider the markets concerned in light of the new circumstances.” 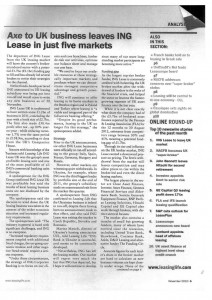