What you don’t know about D&D Leasing

Leasing and HP can be a cost effective way of acquiring assets for your business. D&D Leasing provide flexible equipment finance options for most types of equipment up to 5 years:

Are you looking to finance:

Plus many other equipment requirements

We were initially a Canadian leasing company that came to the UK at the height of the credit crisis. If you’ve been following the news in the last few months, you’ll have heard of the woes of Canada and specifically the fires in Fort McMurray.

For those unaware, Fort McMurray is where Canada, in essence, mines all its oil; it’s also a densely covered forest land that has been quite arid all season.  This led to a perfect confluence of events resulting in a raging no-holds­-barred forest fire the likes of which your television sets couldn’t imagine.

And this is the backdrop for one of our equipment finance lessees. All of Fort McMurray needed to be evacuated and the town shutdown. As a lessor, this meant we needed to connect with all of our clients and find out a) if they were OK, b) if we could do anything for them, including delaying payment demands, and c) how things were going.

Enter Jeremy Hall. Jeremy owns a contracting firm in Alberta and needed forbearance for a month or two as he wanted permission to take his equipment back into town to helpwith the evacuation efforts, sacrificing his income earning potential. Not only does he operate heavy machinery, he’s also a firefighter, we’re told. Jeremy was put to work clearing away buildings that had been demolished by fire. Coming across a door with a rainbow across it, indicating it was a child’s room, Jeremy paused, entered the room and found a child there. She was alive. He was able to pass her on to rescue workers, who reunited her with her family in Ontario. Jeremy has since been interviewed by local and national news.

This is just one of many stories of our lessees –  not every one so dramatic, but all of them equally important. D&D Leasing knows and understands your customers. We’ve been in this industry for 16 years right alongside them, during the good times and bad. When disaster strikes, we don’t hesitate to forbear a payment or to lend a hand.

So how does this translate to you and your customer base? It means we are there to support your customers whether they need a lease, loan, an HP or whether they want a vehicle. It also means that we can run the gamut of the credit box with pricing that matches the risk, with rates now as low as 10% and deal sizes as high as £100,000. 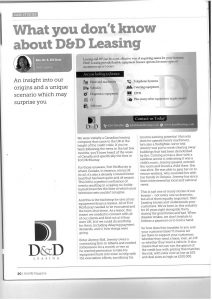