It’s hard to believe that there have been 51 US annual leasing conventions before this one, the first one must have been in 1962, which was before kipper ties, before flared trousers, in fact pretty much in the “Mad Men” era. It was also the year of the Cuban missile crisis and JFK, and incredibly the world’s population then was only half of what it is today.

The US leasing industry since then has grown enormously, weathering economic upheavals like the 1970s oil crisis, the dotcom bubble, and having reached the level of an $827 billion industry, now looks unstoppable. It has even shaken off the Great Depression of 2008, which caused a dive of 40 percent in new business at the time, and has been on a growth trendline for the last three years. Nevertheless, the US leasing industry is not one to leave things as they are, and this year’s conference led with a heartfelt Adapt, Innovate, and Win slogan. Good for them.

You certainly get the idea that the convention’s a very commercially sound formula, when you see that separate sponsors had been found without difficulty for each of Hotel-room WiFi, Attendee roster, Hotel card keys, Conference bags, Lanyards, Convention pens, and Electronic handouts. While the spouses and companions were being shuttled to the Kennedy Space Center, Rick Remiker gave the Chairman’s address, a punchy presentation, from a 60-metre wide stage with a full width Cinerama-style back projection screen. The industry is feeling positive and confident, yes there are always complications like accounting or tax credits, but it was ever thus, and the main thing is that the industry has meaningful increases in business volumes pulsing through its veins again. 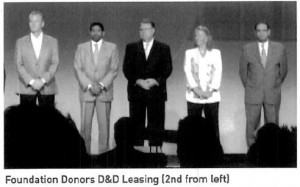 The philanthropy theme runs strongly through the event, the association partnering with its affiliated body, the US Leasing Foundation, in a Give Back programme the day before the business starts. Executives have a choice of a charity bike ride, a Community Service project in a Give Kids the World Village, and a Gift of Giving Children’s Advocacy Center. The US Leasing Foundation itself depends in part on donations from corporate sponsors in the leasing industry, and it was good to see Andrew Denton of CHP Consulting, and Bill Dost of D&D Leasing up on the stage getting applause for their high level of donations to the Foundation. The US Leasing Foundation is also a mine of heavyweight leasing research  reports, and Leasing World (at a modest level) is also a supporter and donor.

What did we find the most interesting of the many concurrent sessions? Naturally, the broker session, Scott Wheeler of Wheeler Consulting had produced a survey examining how larger brokers and their funders ranked various qualities like the importance of partnerships, or level of technical ability. Although the results were not surprising, e.g. funders valued honesty, respect for detail and strong credit understanding from their brokers, the interesting debate came when the talk turned to the Broker Cycle, the Boom-Bust lifecycle that brokers seem unable to shake off, and the panel’s conviction that with increasing funding available the deal quality could become compromised, it was just a matter of time before the next wave of dodgy deals would cause an acrimonious breakdown in funder-broker  relations again.

Financing Cloud computing merited its own session, and was a good example of how asset financiers get their products to fit new financing opportunities like Cloud. We are all used to SaaS, software as a service, and HaaS, hardware as a service, but the speakers felt that financial products had to be flexible enough to deal with XaaS, i.e. literally anything as a service, and laid out the various challenges and pitfalls that had been overcome.

Clean energy technology  was also on the agenda, as it has been at the convention for quite a few years now. Wind power and solar account for the lion’s share of installations, but clearly the US market is driven by subsidies and incentives, for example companies being able to claim grants for retrofitting clean energy like LED lighting in their warehouses and factories. It remains a complex market, with its feed-in tariffs, retroactive subsidy changes and power purchase agreements, but the panel which included De Lage Landen, US Solar Finance, and Energy Tax Savers gave a broad  insight into this market of  Sale and Leasebacks, Partnership Flips, and Inverted Leases.

Finally, it was good  to see a sizeable contingent of  US participants at the convention, naturally the larger software providers like NetSol Technologies, CHP Consulting and White Clarke Group are always present in force, but also there was the large Invigors team, now that they are affiliated with The Alta Group, and that indomitable transatlantic voyager, Bill Dost whose Canadian and UK companies require him to shuttle frequently between the US and Europe. 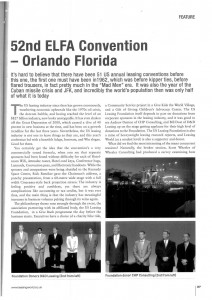