UK-based DND Finance has announced that its Score Mastercard credit card, which is aimed at businesses as well as consumers, has been certified as Shariah-compliant.

Launched last month, the credit card is aimed at helping customers build credit and cut down their long-term credit costs.

It is designed for individuals and companies with zero or bad credit history to help them build their credit scores.

According to a survey commissioned by Ipsos MORI Social Research Institute, there are more than 2.8 million Muslim consumers in the UK and over 63% of these consumers have relocated from outside the UK.

DND Finance CEO Bill Dost said: “DND Finance is excited to bring this revolutionary product to British Muslim consumers who have been looking for a product that meets their needs. There is no credit card in the UK that is Shariah-compliant, until now that is.

“This product will enable Muslim consumers to create a credit profile, access the Western promise of an improved life for them and their families while maintaining their faith principles.”

The new offering also claims to offer an ‘affordable’ APR with no interest on purchases and outstanding balances allowing thin-file customers to build or rebuild their credit score.

Shariah expert, co-founder and director Farrukh Habib said: “Score Mastercard, being a halal credit card, is a huge initiative towards greater financial inclusion and tapping into a niche market.” 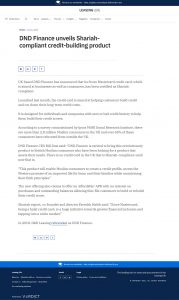