This agreement provides Aqiok with the financial service infrastructure that draws on DND’s nearly twenty years of operations to deploy a new app in its Omni Channel Platform (“OCP”) and app Product Line.

From its operations in London, UK, DND will back-end service the origination of new financing requirements from Aqiok customers, whilst Aqiok ensures a superior customer experience for cosmetics manufacturers and brands.

“In the cosmetics space nearly 80pct of producers are classified as small to medium size enterprises,” said Matthew Keddy, CEO of Aqiok. “Utilising our managed platform, we are in a unique position to introduce a new marketplace lending app with DND to meet that operational and growth needs of our customers.”

“We are pleased that we can bring our almost two decades of SME finance expertise in North America and Europe to this new partnership,” said Rev. Dr. Dost, Group CEO of DND Finance. “Having implemented numerous contracts for clients and brokers successfully, we are confident we can meet or exceed the operational needs of Aqiok’s new lending app.”

According to AltFi Data, total lending in 2017 exceeded £5 billion in the UK, an increase of 45pct year-on-year. Additionally, marketplace lending represents 15pct of the overall asset-based finance market, which reached a record level of £32 billion for 2018, in the market’s seventh year of consecutive growth.

DND cites a recent report from Euler Hermes which notes a broader demand for lease financing, as “SMEs in Europe lack an estimated €400 billion of bank financing.” Germany, France, UK, Italy, Spain, Netherlands, Poland and Sweden account for 78pct of the European SME leasing market, and according to Leaseurope, nearly half of all SMEs utilise lease financing and leasing is used by more SMEs than bank loans.

Matthew Keddy, Aqiok CEO, said, “At scale internationally, the relationship with DND ensures we are delivering new apps in our product line that are high impact.”

DND Finance, having offices in both Canada and the United Kingdom is a multi-national finance company. Founded in 2000 to fund the underserved SME arena in Canada, the company then expanded to the UK in 2009. Their goal is to change the lives of 1,000,000 entrepreneurs. DND engages in finance lines including Leasing, Professional Loans, Commercial Loans, Motor Finance and most recently a secured Charge Card. 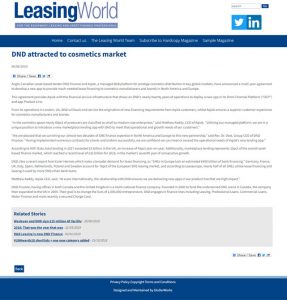