D&D Leasing is continuing its tradition of raising awareness of less well-known and often underfunded charities for its charity event on Tuesday 14 December in London.

Funds raised at the event will go towards Karma Nirvana, which supports the victims of honour-based abuse and forced marriage.

The invitation-only event is free to attend, with a focus on fundraising for the charity.

D&D Leasing CEO Rev. Dr. K. Bill Dost, who is also a board member of The Leasing Foundation, said: “We chose Karma Nirvana as our charity this year because honour-based abuse remains a relatively unpublicized, and often unspoken, concern – but one that affects many people in the UK.”

The founder of Karma Nirvana is Jasvinder Sanghera CBE, a forced marriage survivor who wrote about her experiences in The Sunday Times bestseller, Shame. She was instrumental in the creation of a specific UK forced marriage criminal offence in 2014.

For details on the charity event email KBD@danddleasing.co.uk. 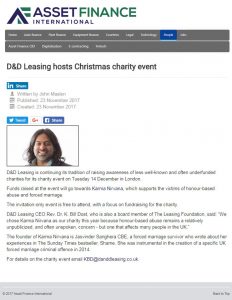